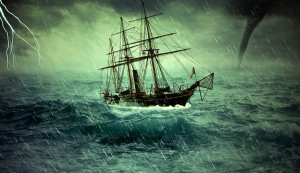 Every November for the past dozen or so years Folk Strip hosts Jack, Jonathan, and Gordy team up to bring you a program of nautical themed folk songs of mayhem and merriment we call our Annual Gales of November show. The show takes its name from the immortal Gordon Lightfoot classic “The Wreck of the Edmund Fitzgerald’, which spellbindingly recounts the tragic tale of the then largest freighter plying the Great Lakes that sunk with all hands lost in the notorious 1975 November Gale.

This year we feature classics by Lee Murdock, the Bard of the Great Lakes, ex-submariner and sea shanty specialist Tom Lewis, Finest Kind, Norman Blake, Canadians David Francey and the legendary Stan Rodgers, and of course Gordon Lightfoot’s “Wreck of the Edmund Fitzgerald”.

There is a great maritime musical tradition in the Pacific Northwest, from which we sample nautical gems like "Rant and Roar by seminal 1970s Portland group Howling Gael, and “The Ballad of the Peter Iredale” from Astoria’s Brownsmead Flats, who’s self-proclaimed musical style crabgrass is maritime influenced bluegrass. We also include the hilarious recounting of “When Carissa Came Home” from our own Jonathan Lay with stellar backing from Local Linda Tomasi. Portland favorites Shanghaied on the Willamette give a lively account of the ill-fated “Steamboatin’ Jamiesons”, and William Pint and Felicia Dale tell the non-tragic tale of the “Wreck of the Lady Washington”.

Join us for a lively show sure to put a smile on your face.

Update Required To play the media you will need to either update your browser to a recent version or update your Flash plugin.
Topic tags:
Music
Genre(s):
Folk

END_OF_DOCUMENT_TOKEN_TO_BE_REPLACED

Evening News
Despite lack of crowds, Salem residents weigh in on Presidential Inaguration