Persephone Rising: A Global Sonic Retelling of the Underworld Myth 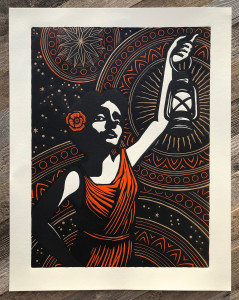 We'll be delving into the Eleusinian mysteries of the Ancient Greeks with a musical, soundscape version of the Homeric Hymn to Demeter and the mythic tale of her daughter, Persephone. The show transcript will be uploaded after broadcast.

The Petros Tabouris Ensemble  Petros Tabouris (Πέτρος Ταμπούρης) was born in Athens in 1967 and studied both music and information technology (the latter at the National Technical University of Athens). From a very young age he showed an interest in Greek music and instruments used in popular music. After discovering Byzantine ecclesiastical music and the theory of Greek popular music, and meeting musicians, he became involved in composition and research.

In the 2000s, Tabouris released many records in Greece and in Europe and has made a study of ancient and medieval/post-Byzantine music and instruments used in Greek popular music. He has experimented in the reproduction of ancient Greek instruments and their playing techniques. He has supervised series of digitally remastered 78 rpm recordings of Greek light music, rebetiko, Smyrna and folk songs, and has worked on recordings of traditional music of Balkan peoples and Greek folk songs.

Dana Reason ​is a Canadian-born pianist, composer, improviser, sound artist, and musicologist working at the intersections of twenty-first century musical genres and interdisciplinary practices. Re​ason was part of ​The Space Between​ trio with the electronic music pioneer Pauline Oliveros;
and is documented on over 17 recordings. She has been long-listed for Grammys in several categories including jazz, arranging and contemporary classical music. She has recorded music by the 2020 NEA Jazz Master, Roscoe Mitchell, and DJ Spooky and has performed with a wide range of acclaimed artists, some of whom include: Joe McPhee, Joëlle Léandre, George Lewis, Stuart Dempster, Barre Phillips, Cecil Taylor, Mark Dresser, India Cooke, Kyle Bruckmann, and Lori Goldston. Reason is part of the ReSoundings trio with Catherine Lee and John Savage.The trio recorded and performed Roscoe Mitchell’s seminal work: Nonaah Trio at the Park Avenue Armory in NYC, 2019. Recording of the work is available on “Roscoe Mitchell with Ostravska
Banda”, on Hive Records, 2020.

As a film composer, Reason premiered her soundtrack for the Canadian silent film: “Back to God’s Country”(1919) by Nell Shipman as well as performed the score live at the Brooklyn Academy of Music, 2018. Recently, Reason served as both composer and music supervisor for a new collection featuring films by Alice Guy Blachet Vol.2 (Kino Lorber, 2020). Additionally, Reason performs on soundtracks including: ​Within Our Gates​ and ​Body and Soul​ on Pioneers
of African-American Cinema and the 2018 Emmy nominated PBS documentary - ​Birth of a Movement ​(2017). Reason was credited as arranger for Paul Miller (DJ Spooky) on the 4 part PBS Documentary series: “Reconstruction: America After the Civil War” (April 2019) by Henry Louis Gates. In 2018, Reason was one of four Oregon artists commissioned by the High Desert Museum, Bend to create her large scale installation and sound art/sonification exhibit: “She Breathes Water”. Reason is the Deep Listening certificate holder (Pauline Oliveros). Since 2018, she curated the “Site of Sound” series in Corvallis, Oregon where she is also Assistant Professor of Contemporary Music at Oregon State University.

Dr. Jacob Job is a research associate and field recordist working for the Sound and Light Ecology Team in the Department of Fish, Wildlife, and Conservation Biology at Colorado State University. He is currently leading the Sounds of Your Park project in conjunction with the National Park Service, Parks Canada, the George Wright Society, and the IUCN World Commission on Protected Areas. Sounds of Your Park is a continuously growing global collection of natural and cultural sounds from the planet’s protected places. These recordings work to inspire everyone to engage with our natural and cultural heritage, and foster meaningful connections with our parks. He also recently completed Voices of a Flyway in conjunction with National Geographic

Iannis Xenakis (Greek: Γιάννης (Ιάννης) Ξενάκης [ˈʝanis kseˈnacis]; 29 May 1922 – 4 February 2001) was a Greek-French composer, music theorist, architect, performance director and engineer. He is considered an important post-World War II composer whose works helped revolutionize 20th-century classical music. Xenakis pioneered the use of mathematical models in music such as applications of set theory, stochastic processes and game theory and was also an important influence on the development of electronic and computer music. He integrated music with architecture, designing music for pre-existing spaces, and designing spaces to be integrated with specific music compositions and performances.

red fish blue fish is the resident percussion ensemble of the University of California, San Diego. The group functions as a laboratory for the development of new percussion techniques and music, and has toured widely. Its concerts have included Lincoln Center and the Henry Street Settlement in New York City as a part of two Bang on a Can marathon concerts, the Agora Festival (Paris), the Los Angeles Philharmonic's Green Umbrella Series, the Centro des Bellas Artes in Mexico City, and the Percussive Arts Society International Convention. In addition, the group offers a regular series at the University of California, San Diego. red fish blue fish has recorded for John Zorn's Tzadik label.

Maggie Dubris is a writer and sound artist based in New York City. Maggie is the author of BrokeDown Palace (coming from Subpress in November 2019), In The Dust Zone (with artist Scott Gillis), Skels, Weep Not, My Wanton, and WillieWorld. Her work has been featured in David Gordon’s America and Mabou Mines’ Song For New York, and she has published in numerous literary magazines.

For most of the 1990s Maggie was a main songwriter and guitarist for the all-female extravaganza, Homer Erotic, which released two CDs, Yield and Homerica the Beautiful. After the group disbanded in 2000, she became part of a loose-knit, nationwide communtity of songwriter/musicians who collaborate on writing, recording and performing. She also began creating soundscapes that have been featured in exhibitions in New York City, Newark NJ, Pittsburgh PA, and Portland OR. In 2016 she took a field recording course in the Sierra Nevada and was certified as a Natural Sound Recordist by the Cornell Lab of Ornithology. In 2018 Maggie was artist-in-residence at the Goetteman Residency in Gloucester, MA, and spent a month doing underwater recording with hydrophone as well as field recording at historic maritime sites.

Maggie’s current projects include Blue Carousel, a collaboration spotlighting ocean overfishing, with the artist Linda Byrne; Sounds of Rocky Neck, composed mainly of sounds recorded in Gloucester and slowed to the speed a bird would hear them; and an urban sound project with composer Pete M. Wyer honoring Walt Whitman. A new book that is so far merely a wisp of a fog of an idea is floating beneath her consciousness, and she hopes it will emerge in the next few months. After which, given her usual writing speed, it will reach its final form and burst forth into the world in about ten years.

Ben Mirin is an ethnobiologist, sound artist and educator who travels the world recording animal sounds for research, and samples their voices to create music that inspires conservation. He is currently a Graduate Research Fellow of the National Science Foundation and a graduate student in ornithology at Cornell University.

Ben is the creator and host of the digital and television series WILD BEATS on National Geographic Kids and Nat Geo Wild, and a “National Geographic Explorer,” meaning he has received grants from the National Geographic Society. He is also a Fellow at The Safina Center and The Explorers Club, an Ambassador at The Cornell Lab of Ornithology, and was the first Artist in Residence at the Bronx Zoo.

As a lifelong naturalist and musician, Ben combines his two passions to capture untold stories about nature through sound. His work has been recognized with grants from the National Geographic Society and previous art residencies at the National Centre for Biological Sciences in Bangalore, India and the Lurie Garden at the Chicago Art Institute. He is the recipient of the 2017 Scott Pearlman Field Award in Exploration, a three-time recipient of the Carl Safina Fellowship and Communicating Science Prize, and a four-time TED speaker. His new online game, BeastBox, has been distributed to over 3.5 million students worldwide, and he has written, produced, and starred in films about science for National Geographic, bioGraphic, Slate.com, Smithsonian Magazine, Scientific American Online, Audubon Magazine Online, and many others. He lives in Ithaca, NY, and volunteers at the New York Audubon Society.

...and your host, Nicole Martin.