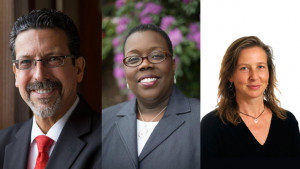 We’ll hear a portion of Making Democracy; to listen to the full event: http://oregonhumanities.org/programs/think-drink/think-drink-january-2020/   Ben Waterhouse of Oregon Humanities recorded this event.

Shannon Wight has twenty years of experience transforming criminal and juvenile justice systems in Oregon and Louisiana. She is deputy director at Partnership for Safety and Justice.

Justice Adrienne Nelson was appointed to the Oregon Supreme Court on January 2, 2018, making her the first African American to sit on the state’s highest court and on any appellate state court.

Oregon Humanities is committed to bringing people together across difference. Each year, Oregon Humanities offers hundreds of public conversations and programs across the state, trains and supports dozens of discussion leaders, and awards tens of thousands of dollars in grants to organizations that, like us, believe in the power of people in rooms listening, learning, and struggling together. Oregon Humanities publishes essays, photographs, films, and audio recordings that explore the thoughts, perspectives, and experiences of Oregonians, especially those who have been ignored, generalized, or oppressed.

Update Required To play the media you will need to either update your browser to a recent version or update your Flash plugin.
Download audio file
Topic tags:
Activism, Civil Rights/Human Rights, Government/Politics, Law/Court/Crime, Prison