What a Week in the Fossil Fuel Fight! 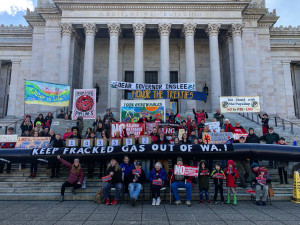 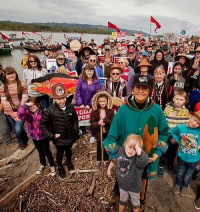 This past week the Pacific Northwest's three largest fracked gas projects faced major setbacks. In Oregon the Department of Environmental Quality issued a resounding denial of the proposed Jordan Cove LNG project and the Pacific Connector fracked gas pipeline, which have faced fierce opposition from a grassroots coalition for nearly 15 years. The project cannot be built without the 401 Clean Water Act permit that the Department of Environmental Quality has denied and this denial could be a fatal blow to the project. Meanwhile in Washington State, Governor Inslee, who originally supported the Tacoma LNG facility and the world's largest methanol refinery proposed for Kalama, has expressed firm opposition to both these projects and any future fracked gas infrastructure, something project opponents have been demanding from him for years.

On this episode of Locus Focus we talk with some of the key activists in Oregon and Washington who have organized and mobilized to demand the rejection of these fracked gas facilities. We'll be joined by Dan Serres, Conservation Director for Columbia Riverkeeper, Allie Rosenbluth with Rogue Climate and two Kalama methanol opponents - Cam Keely and Jennifer Vinnard.

On May 18 opponents of the Kalama Methanol refinery are holding No Methanol Land and Water Action and Community Campout at Camp Kalama, along the Kalama River near its confluence with the Columbia River. Join them in a land and water action in Kalama, to tell Governor Inslee and the Department of Ecology to protect our communities from this massive fracked gas project! Camp Kalama is the closest non-industrial business to the proposed refinery site, and houses many permanent RV residents. The owner and residents have invited everyone to help stop this project, and protect this community from the health and safety impacts of the Methanol Refinery.

The World of Jazz
Pack Your Bags!

END_OF_DOCUMENT_TOKEN_TO_BE_REPLACED

The Last Hour
Hour Of The Dead (Metal TLH 1)