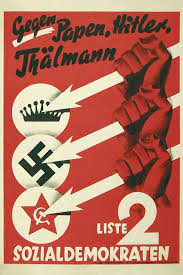 Surprising all the experts, the German Social Democratic Party rose from the dead to win the German national election in September of last year, promising to deal with the capitalist crises of our time: pandemics, climate change, growing inequality, and the threat of right wing authoritarianism. In the second part of a two part interview, Bill Resnick and Bill Smaldone discuss whether they can and will pursue the radical course that’s necessary. Bill Smaldone teaches history at Willamette University with a specialty of Germany in the 20th Century. Bill cofounded Radio KMUZ in Salem, an independent left station like KBOO. Among his books are Confronting Hitler: German Social Democrats in Defense of the Weimar Republic and European Socialism. The first part of the interview, Social Democracy in Germany, aired on January 10.

Update Required To play the media you will need to either update your browser to a recent version or update your Flash plugin.
Download audio file
Topic tags:
Global Affairs, Government/Politics, History