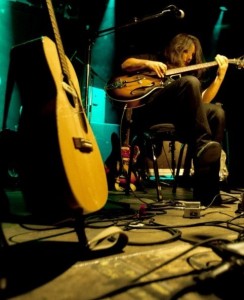 We have begun a new Artist Program here at KBOO. Formally called “The KBOO Community Radio Artist Support Program” we began this program to provide resources and assist artists working creatively with sound. Every year, an artist will be awarded twenty hours of studio recording and production time with a KBOO Mixologist. They will also be welcome to use field recording equipment, and other KBOO resources, and will present their work publically at the end of the 6 month long program.
The art created during the support program will also be hosted on the KBOO Website, and we will include publicity and other media sponsorship benefits with the Artist Support Program.  This year, the first for our Artist Support Program, our artist in residence will be Portland based guitarist, composer and improviser Marisa Anderson.

Marisa Anderson is a local treasure, and I am thrilled that she will be our first Artist in Residence. Here newest record, “Mercury”, will be released on June 5th, and she’ll be performing in town June 1st at the Portland Improvisation Summit, and June 16th at Mississippi Studios for her record release party.

She’ll be at KBOO June 30th for an afternoon Meet-and Greet. At that event, we may have available the first KBOO Record, a 7’ featuring Elizabeth Cotten on one side (previously unreleased songs recorded during a KBOO Live Broadcast in 1975 from the Euphoria Tavern) and Marisa on the other.

You can learn more about Marisa at her website, marisaandersonmusic.com