Sam Robinson Tells the Story of the Chinook People 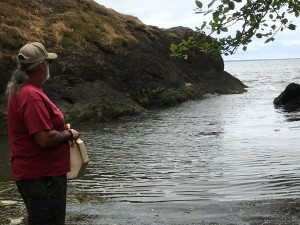 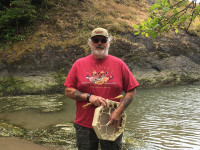 THIS SHOW ORIGINALLY AIRED ON AUGUST 3, 2020

In the midst of election season insanity, let's step back in time and forward into the future by listening again to an interview I did with Chinook Elder Sam Robinson in early August.

In mid July I went out to Chinook Point on the Washington side of the Columbia River near its mouth, to talk with Sam Robinson, a longtime Lower Chinook Tribal Council member. He told about the history of his people and the land they know better than any of us whose ancestors are from elsewhere.

On this episode of Locus Focus we listen to that conversation, in which Sam tells stories of his people, from pre-contact time to their encounters with Lewis & Clark, their unsuccessful efforts to sign a treaty with the United States government that did not rob them of their land and their amazing ability to survive and begin to thrive, despite losing their land and nearly losing their heritage.

Update Required To play the media you will need to either update your browser to a recent version or update your Flash plugin.
Download audio file
Topic tags:
Activism, COVID19, Indigenous, Environment/Climate