Kalama Methanol Another Time Around 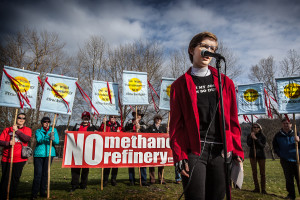 For over five years the threat of being the site for the world’s largest methanol refinery has loomed over the small community of Kalama, Washington, 40 miles north of Portland. This month the Washington Department of Ecology released a new Draft Supplemental Environmental Impact Statement that reveals what the project’s backers have long denied: the refinery would result in significant methane pollution from fracking. But the study also relies on speculative mitigation and an unenforceable market analysis to prop up this proposal. The comment period for the public to weigh in on the decision of whether or not to grant a Shorelines Permit for the methanol refinery has been going on all month, with a broad array of community voices urging Ecology to reject this proposal.

On this episode of Locus Focus we talk again with Dan Serres, Conservation Director for Columbia Riverkeeper about regionwide concerns over the hazards of this methanol refinery.

There will be a workshop on how to write comments about the Kalama methanol refinery Monday, September 28 at 6 pm. At 5 pm you can view the slideshow documentary "A View from the Blast Zone," about the struggles to stop the Kalama methanol and Tacoma LNG facility, and then join the workshop at 6. Click here for more information on how to join the meeting. You can also click here to watch "A View from the Blast Zone."