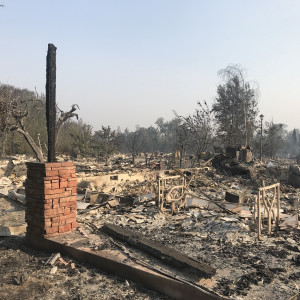 All summer Trump has ranted about how Portland is being burned down by radical anarchist Antifa mobs. Of course Portland has not burned down, but as we speak, much of Oregon actually is on fire, wildfires inflamed by Trump’s flagrant disregard and denial of impending climate chaos.

On this episode of Locus Focus we talk with Allie Rosenbluth, with Rogue Climate in Phoenix, Oregon and Dominick DellaSala, with Wild Heritage in Talent, who were both forced to evacuate from their homes in Talent last week. Later we’ll also talk with former wildfire fighter and founder of Fire Fighters United for Safety, Ethics and Ecology, Tim Ingalsbee in Eugene and Eric de Place, with Sightline Institute in Seattle. These conversations are taking place as smoke chokes the Pacific Northwest and massive fires are still burning across the region.

If you want to help support relief efforts in Southern Oregon, you can contribute to Rogue Valley Relief Fund. Go to rogueclimate.org and click on Donate.

If you live in the Portland area and would like to donate essential supplies to displaced people in Southern Oregon, you can drop them off at the Oregon Sierra Club Office at 1821 SE Ankeny St in Portland. Check the  Oregon Chapter Sierra Club Facebook for an evolving list of needed supplies. They have already sent over a dozen large vehicles full of supplies to partners on the ground in Southern Oregon and across the state and will send more throughout this week!

Update Required To play the media you will need to either update your browser to a recent version or update your Flash plugin.
Download audio file
Topic tags:
Activism, COVID19, Energy/Natural Resources, Environment/Climate, Civil Rights/Human Rights