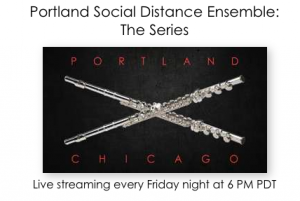 Dmae continues coverage of Portland arts groups creatively pivoting during the pandemic. First up  45th Parallel Universe and their Friday night Portland Social Distance Ensemble.  She talks with executive director Ron Blessinger and tech volunteer Danny Rosenberg who created a sound app to make it work.  Then Dmae features an excerpt of a film by World Stage Theatre founded and run by Shalanda Sims who directed the film titled "Growing Up Black in Oregon: A Conversation." We'll hear four Black youth describe in personal detail about their experiences.

World Stage Theatre, a multidisciplinary arts organization, created a film and a conversation with local youth and young adults on their experience growing up Black in Oregon. They explore the joys of being human as well as the trauma of being judged by the color of their skin. This film and conversation debuted on the Virtual Vanport Mosaic Festival.  This film is part of an on-going conversation so stay tuned!

Update Required To play the media you will need to either update your browser to a recent version or update your Flash plugin.
Download audio file
Topic tags:
COVID19, Arts/Culture, Community Building, African American
Genre(s):
Arts and Culture