Vortex I: A Biodegradable Festival of Life 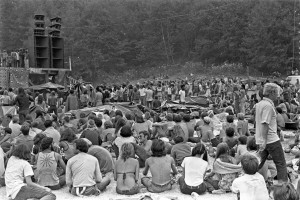 Vortex I is the only state-sponsored rock festival in United States history.

The festival was held in 1970, during the Vietnam War, in order to prevent violence between 25,000 pro-war legionnaires and 50,000 anti-war demonstrators.  Both groups had targeted Portland as a place of demonstration during Labor Day week.  Governor Tom McCall, understanding the potential for wide-scale conflict, collaborated with long-haired hippies to find an alternative gathering for the anti-war demonstrators.

What they agreed on would result in Vortex I: A Biodegradable Festival of Life.  At its peak, 40,000 people were in attendance at this state-sponsored festival, which was hosted 25 miles away from the city.  The event was a success, and no one was harmed during the demonstrations in Portland.  Vortex I is remembered as Oregon's Woodstock, a celebration of peace and love.

Interviewed are an artist who performed at the event, a writer who documented the event, an organizer who initially pitched the idea to the governor's office, and a Rainbow Family member who witnessed the naming of the Rainbow group at Vortex.  Listen to how they constructed an alternative community for hippie ideologies to prevail.

Update Required To play the media you will need to either update your browser to a recent version or update your Flash plugin.
Download audio file
Topic tags:
Activism, Arts/Culture, History, Community Building

Movin' On
Movin On In Harmony