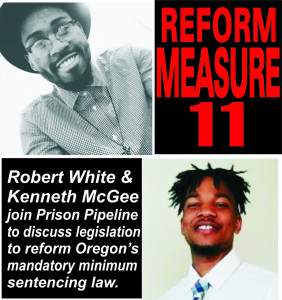 Robert White & Kenneth McGee join the discussion to share their experiences of sentencing and incarceration as teens and discuss the importance of this historic legislation.

At age 17, Robert White committed a Burglary and Robbery and faced a Measure 11 mandatory minimum sentence, he signed a plea and served 61 months in the Oregon Youth Authority system. This being his first offense, a desire to change the system’s handling of first-time offenders grew into an obsession. During his incarceration, he served on a number of boards and, prior to his release, he applied to become a Youth council under JJSG of The Annie E Casey Foundation where he served a two-year term as a presenter/speaker and performer at the Deep End conference for JDAI Sites in Arizona. He now is serving a second term for Youth Advisory Council and continues work to change criminal justice policies in Oregon and become a motivational speaker to help troubled youth. He is also A Spoken Word artist, Activist, Mentor, published author and Educator. He currently works with at-risk youth alongside families and caseworkers/probations to develop case planning to help them succeed. He has joined with a co-worker to establish a Measure 11 workshop throughout the Portland Public School District.

At the age of 16, Kenneth McGee signed a plea and served 70 months. While incarcerated he noticed many youths weren’t getting the help they needed to rehabilitate. After his release in 2018 and wanting to make a difference in his community, he began distributing food and toiletries to the less fortunate.  He works with Youth Outreach Leadership Internship and holds Measure 11 workshops at Portland Public Schools; he has also attended ACLU and Partnership for Safety & Justice lobby days to raise awareness about M11. Kenny is now embarking on a journey to create a place to help at-risk youth and those releasing from incarceration discover their talents/strengths to create a better life.

Contact your Oregon Legislators and urge passage of this bill!  Find your legislator: https://www.oregonlegislature.gov/FindYourLegislator/leg-districts.html

Youth and Measure 11 in Oregon: Impacts of Mandatory Minimums https://ojrc.info/youth-and-measure-11-in-oregon