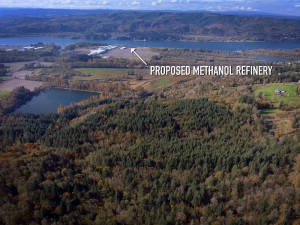 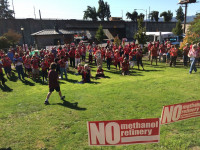 On November 13, a report  written by the company proposing the world’s largest fracked-gas-to-methanol refinery was released by the Port of Kalama and Cowlitz County, WA. The proposed fossil fuel refinery at the Port of Kalama in Southwest Washington is controversial because of the impacts on both local residents’ health and our climate. Despite the company’s claim that the refinery could result in a climate benefit, the refinery would consume a stunning amount of fracked natural gas—one-third as much gas as the entire state of Washington. The Port of Kalama and Cowlitz County will hold a public hearing on December 13 in Longview, at which the public can express their opinions about whether or not this project should be approved.

On this episode of Locus Focus we speak with Jasmine Zimmer-Stucky, Senior Organizer with Columbia Riverkeeper, about the dangers this mammoth fossil fuel facility poses for the Pacific Northwest, and for that matter the world.

Jasmine Zimmer-Stucky works to support community members all along the Columbia River. Her role is to inform and engage residents in Oregon and Washington on coal export and oil terminals that would transform the scenic Columbia River Gorge into a dirty energy corridor. Jasmine led the public campaigns to stop would-be coal export terminals from polluting Oregon’s air and water and now focuses on fighting fracked gas projects in Southwest Washington.

You can submit comments on the draft Supplemental Environmental Impact Statement here. You can also provide testimony at the public hearing on December 13, 2018 from 6 p.m. to 9 p.m. at the Cowlitz County Event Center located at 1900 7th Avenue, Longview, WA. To arrange for a carpool contact Bonnie @ goto350pdx@gmail.com