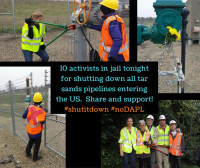 On Octobere 11, five climate activists shut off the flow of Canadian tar sands oil through pipelines in Minnesota, North Dakota, Montana and Washington. They broke into enclosures around cut-off valves for the four pipelines, cut chains and carefully turned off the valves, making sure it was done properly so the pressure didn't burst the lines. The five activists, along with five supporters, then awaited arrest. They face a range of charges, including criminal trespass, sabotage, burglary and criminal mischief.

In addition, two filmmakers who were covering the actions were arrested and also face felony charges. One of them,Deia Shlosberg, who appeared on Democracy Now! on Monday, joins us by phone for this program. The other, Lindsey Grayzel, is a documentary filmmaker in Portland. She was arrested filming Ken Ward attempting to shut down the TransMountain Pipeline in Skagit County, Washington, along with her cinematographer Carl Davis. They face a possible 30 years in prison on charges of felony burglary, felony 'criminal sabotage,' and misdemeanor trespass.  On the advice of her attorney, she is not currently talking with the media. In a statement sent to KBOO, she stated, "Everybody needs to be afraid when our first amendment rights are in jeopardy. This is not about me. This is not about Carl. This is not about Amy Goodman or Deia Schlosbereg. This is about the public's right to know what is going on in this country."

Schlosberg, a New York-based documentarian, could face a 45-year prison sentence for filming protestors at a TransCanada Keystone Pipeline site in Pembina County, North Dakota. Prosecutors allege that she was "recruited to record the criminal activity." She most recently produced 2016 documentary How to Let Go of the World and Love All the Things Climate Can't Change, directed by our other guest, Josh Fox. Fox is best known for his films Gasland and Gasland 2, which shined a light on the gas fracking industry.

Schlosberg also directed Backyard, another film about hydraulic fracturing. She won the National Geographic Adventurer of the Year award in 2009, after spending two years trekking 7800 miles along the spine of the Andes Mountains.

Website for "How to Let Go of the World and Love the Things Climate Can't Change" and Petition to support Deia Schlosberg: http://www.howtoletgomovie.com/

Care2 petition to protect freedom of the press and drop charges journalists and filmmakers: http://www.thepetitionsite.com/takeaction/918/394/985/?cid=fb_LG_AdsNDpipelinefFOP&src=facebook_ads&campaign=sign_918394985&z00m=28484776

Other links for info about today's guests and the topic discussed:

How to support the resistance at Standing Rock:

To send supplies directly, you can mail them to:

To donate directly to the Standing Rock Sioux Tribe at their PayPal:

To support a women's healing, wellness and birthing center at camp:

Update Required To play the media you will need to either update your browser to a recent version or update your Flash plugin.
Download audio file

Film at 11
Due to continuing technical difficulties, Film at 11 for Friday, February 3, 2023 re-airs an episode from mid June 2021 featuring a review of the Japanese epic The Human Condition