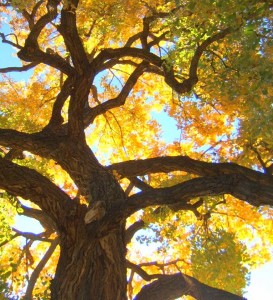 Jordan Fink, founder of World Tree, working with nature to remove CO2 from atmosphere and into soil
Atmospheric carbon could be used to replenish our soil, and in the process, according to Jordan Fink, we could pull enough carbon out of the atmosphere to bring CO2 levels back to what they were in the 1700's. Methods that employ earthworks, vegetation and microbes are available and in use today. Jordan is now in the process of launching World Tree, which will grow into a worker-owned cooperative capable of addressing and reversing climate change. The intention is to put people to work on earth-repair, in ways that are democratic and collaborative, and at a living wage; and to design productive farms, residences, and urban infrastructure, all that intentionally sequester carbon in rich, fertile, soil.  Jordan will be joined by Daniel Lerch, Publications Director of the Post Carbon Institute, on the role cities can play, especially in light of peak oil and climate change. Hosted by Stephanie Potter, call in to 503-231-8187 with your comments, questions.

"When our country experienced drought and soil-loss in the 1930’s, the government created opportunities for unemployed Americans to dig in and repair the damage. Without that kind of leadership today, we have to figure this out for ourselves."--Jordan Fink
Update Required To play the media you will need to either update your browser to a recent version or update your Flash plugin.
Download audio file

Film at 11
Due to continuing technical difficulties, Film at 11 for Friday, February 3, 2023 re-airs an episode from mid June 2021 featuring a review of the Japanese epic The Human Condition