Strangers On A Train by Patrica Highsmith 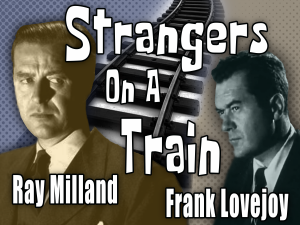 Tonight we present a radio adaptation of the film Strangers On A Train, originally adapted from a novel by Patrica Highsmith. Ray Milland stars as the young tennis pro Guy Haines and Frank Lovejoy appears as the charming psychopath Bruno Antony. Two strangers meet in the club car of a northbound train leaving Washington DC. As they talk it's revealed that each has someone in their life they wished were gone. Bruno suggests that they exchange their murders so that each won't get caught. Guy doesn't agree, but is so vague that Bruno thinks he does agree and murders Guy's wife, who had been blocking their divorce. Now, Bruno begins to blackmail Guy into murdering the person he wants dead. In this case his own father. Also in the cast are Ruth Roman and Patrica Hitchcock both recreating their roles from the original movie. This production first appeared in 1951 on the long running Lux Radio Theater. Which would adapt current, popular movies with some of the original cast members.

Update Required To play the media you will need to either update your browser to a recent version or update your Flash plugin.
Topic tags:
Arts/Culture, Fiction, Radio Theater
Genre(s):
Arts and Culture, Radio Theatre