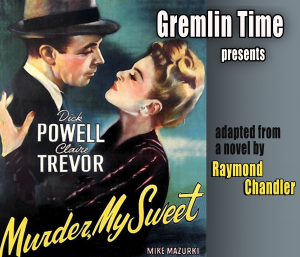 Tonight, we present a radio adaptation of the film noir classic Murder My Sweet starring Dick Powell as private eye Philip Marlow. First an excon wants Marlow to find a woman who used to work at a nightclub that has changed ownership since the excon was sent up. Then a stylish young man wants Marlow to act as his bodyguard while he is making a pay off for the return of stolen jewlery. Based on a novel by Raymond Chandler, and co starring Claire Treaver.

END_OF_DOCUMENT_TOKEN_TO_BE_REPLACED

Between the Covers
A Descending Spiral: Exposing the Death Penalty in 12 Essays by Marc Bookman

Drinking from Puddles
Drinking From Puddles for 01/19/2022