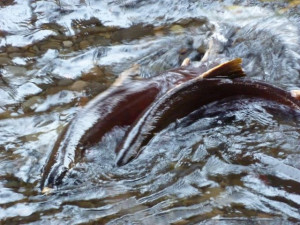 Salmon are the principal iconic species here in the Pacific Northwest, but once salmon were iconic for all northern latitude countries around the world. As we watch the once abundant salmon runs dwindle in the few remaining places where they have thrived over the past century, we are actually witnessing the same processes that previously wiped out salmon runs across Northern Europe and the American Northeast—the impacts of overfishing and industrial pollution.

On this episode of Locus Focus, we talk with Mark Kurlansky, author Salmon: A Fish, the Earth, and the History of a Common Fate, about how the fate of salmon is intimately connected with the fate of all life on this planet.

Mark Kurlansky is The New York Times bestselling author of Havana, Cod, Salt, Paper, The Basque History of the World, 1968, and The Big Oyster, among other titles. He has received the Dayton Literary Peace Prize, Bon Appetit's Food Writer of the Year Award, the James Beard Award, and the Glenfiddich Award. His articles have appeared in a wide variety of newspapers and magazines, including The International Herald Tribune, The Philadelphia Inquirer, The Miami Herald, The Chicago Tribune, The Los Angeles Times, Time Magazine, Partisan Review, Harper’s, The New York Times Sunday Magazine, Audubon Magazine, Food & Wine, Gourmet, Bon Appetit, and Parade. He lives in New York City.

Update Required To play the media you will need to either update your browser to a recent version or update your Flash plugin.
Download audio file
Topic tags:
Animals, Environment/Climate, History, Indigenous, Science/Technology