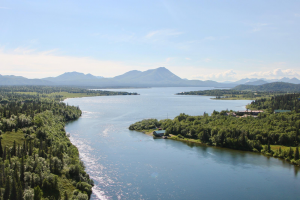 Bristol Bay, Alaska is the source of the largest sockeye run on the planet, located south of Iliamna Lake, at the terminus of several salmon rivers. The main communities are the town of Dillingham, pop. 2,500-ish; and the village & surrounding area of Naknek, pop. 900. Each summer upwards of 15,000 people arrive to disperse among these remote settlements to participate in the 2-month, $300 million frenzy of processing and harvesting that turns fish into money. Many Oregonians participate in this annual harvest as workers and bosses.

In 1918 approximately 40% of the residents of Bristol Bay died of the Spanish Flu epidemic that was brought to the region in part by the cannery ships just when the country thought the sickness had receded, which destabilized the local population and continues to influence village life as inherited trauma. Many villages lost most of the adult population; those orphans who survived have left behind grandchildren who are fighting to prevent the terrible history from repeating itself. The region has limited medical resources and access to the remote areas is by plane or boat only; while resources upgrade and change daily, the region has 0 ICU beds and 0 ventilators.

On Thursday, April 30, public radio station KDLG hosted a Town Hall with Q&A from Dillingham to discuss preparations for the salmon season, which is going forward despite these clear tribal requests to suspend the season to protect the vulnerable indigenous and watershed residents.

Not present are members of the above listed Bristol Bay Working Group.