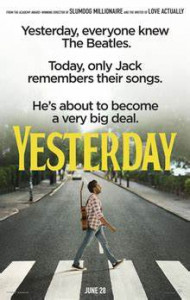 In Echo in the Valley, several musicians and composers associated with the folk-rock movement in Laurel Canyon admit that their innovations were influenced by later Beatle albums such as Revolver and Rubber Soul. In fact, the Beach Boys fell into an unofficial competition with  the band (Pet Sounds), which led to a parody reply by John Lennon, "Back in the USSR." Steven Stills even tried out "I Want to Hold Your Hand" as a folk song.

If the viewer buys into the weird premise of Yesterday, which imagines a world in which the Beatles as a band didn't exist, creating a sadder George-Bailey-less present,  than a whole swath of American music also failed to materialize. The movie doesn't go into this, however, or a myriad of possibilities potentially sprung by this conceit – no Yoko, no LSD, no gurus, no bed-ins, no more everything that one can even think of. It's a nice way of emphasizing the world-shaping impact of the Beatles, I guess, but credited writes Richard Curtis and  Jack Barth don't seem to have fully thought it out. In fact, they turn what would obviously otherwise be a satirical idea along the lines of the Rutles into a standard-issue rom-com.

Director Danny Boyle is most known (after some early TV work) for his visually playful tales of scuzzy people at odds with societal forces, natural forces, or their own demons in films such as Trance (bent psychology), 127 Hours (nature), Slumdog Millionaire (society), Sunshine (cosmos), 28 Days Later... (nature gone awry), The Beach (a cult), A Life Less Ordinary (the law), Trainspotting (addiction and poverty), and Shallow Grave (greed), all of which positioned him as a kind of Guy Ritchie Lite. Here however he himself is up against a different, perhaps worse force of nature, Richard Curtis, purveyor of uniform romances of stupefying repetition. Mr. Curtis draws from a limited vocabulary of  tropes: the majestically sad but otherwise perfect main character, the quartet of endlessly supportive friends, the lanky goofy best friend, the quaintly oblivious parents, the loyal girl who loves the hero from anear, the frantic morning wake up call, the public declaration of love after a falling out, which is the only thing that can set the world right again. All these tropes are packed into Yesterday when the film should be, well, funny. Don't get me wrong: I love Curtis's Notting Hill. It's just that by now I've seen five different iterations of it.

Yesterday also evokes one of the worst sub-genres of the 1980s, the Cheater Movie. These were usually sports films, kid-oriented, but with the bizarre message that cheating was OK, as long as the means involved were a magical dog (Airbud) or holy (Angels in the Outfield). Here the cheater is Jack Malik (Himesh Patel), a struggling singer-songwriter in a seaside town whose day job seems to be in a grocery store. His career "manager" is childhood friend Ellie Appleton (Downton Abbey's Lily James), and one night after a "gig" she drops him off at his bike. Riding home, there is a power surge, presumably global, and in the sudden, if brief darkness, Jack is struck by a car. He awakes from a coma in the hospital with fewer teeth and, soon, also with the knowledge that to everyone but himself,  the Beatles as a band has been blipped from human history, as if the Avengers's Thanos came in for a cultural surgical strike.

The rest tumbles like dominoes: he starts performing the Beatle songs he can remember, is courted by record companies, attracts a music superstar who books him as an opening act, meets a parody of the rapacious female music executive (a terrible Kate McKinnon), pleases friends, loses friends, greets love, loses love, all before making the inevitable public confession of his plagiarism of the songs and his love for the gal – to an at first shocked audience, then to their raucous approval, as if they just heard that Oceana is the enemy state and has always been the enemy state – and then ... scene (with a little kicker about another cultural phenomenon Jack learns has been deleted).

As basically a serious tale instead of a comedy, which it is supposed to be, Yesterday only makes sense really if Jack had remained in his coma (or actually died in the car crash) and the subsequent dull minutes are his dream of an alternate life, like Terry Gilliam's bleak Brazil, or in some interpretations concerning what might be the implied true ending of Spielberg's Minority Report. But Yesterday isn't about making sense, it is about recycling stale plot points like some Rain Man unable to get off-topic.

The reader may wonder, Well, in this fantasia did the Beatles never exist at all? Were they still living people? The answer comes in a climactic scene. After Jack has a backstage encounter with a pair of elderly Liverpudlians, seemingly the only other people who are aware of the former existence of the band, Jack makes his way to a lonely coastal hut, knocks, and who should open the door but ... John Lennon (an uncredited Robert Carlyle in heavy make-up and round wire frame glasses). No Beatles, so no Yoko, no Dakota, and thus no  Mark David Chapman, you see. This living John Lennon is a parody of the supposed gentle, arty ideal of a Lennon, not the occasionally street-violent and groupie-weakened man of the real world. (As a footnote, I know a former Time-Life photographer who was assigned to take candid snaps of the foursome in New York City in 1962. He says that they all were uncultured and rude, but that John Lennon was especially nasty, at one point telling the photographer to go downstairs and grab him a Coke; my friend told him what he could do with his Coke).

This whole sequence is a terrible insult to the millions of fans who still carry the torch nearly 40 years on for the slain singer, who, despite his personal foibles, was nevertheless a great artist. The scene is an example of the crude, short-sighted vulgarity that British cinema often slips into (Ken Russell, Alan Parker, Michael Sarne). Perhaps the filmmakers meant well, meant the sequence to be a meaningful gesture to those who mourne, but instead it comes off as cheap thoughtless exploitation. At such moments one wishes that a Thanos would blip out of existence the dregs of British cinema. A world without Danny Boyle and Richard Curtis! Imagine that.