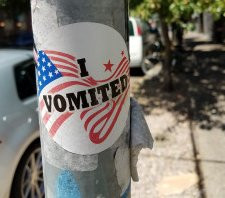 Greg Palast is going to join me tomorrow (9AM Pacific, Thursday April 25th 2018) to talk about the Koch brothers' extensive, AI-driven, antidemocratic machinations.  We know from Greg exactly how the Republicans stole the last Presidential election (Interstate Crosscheck, poll closures, vote switching on machines, etc.), but the reactionary billionaires (not just the Kochs) want more.

They want to control our minds.

Psychometric manipulation, as fueled by data point collection and directed artificial intelligence algorithms, has a power most people cannot conceive.  It is natural to resist the idea that we can be psychologically tricked into making a decision--or failing to.  We don't want to believe that we are that vulnerable.

But consider this: these computers know more about you than the most competent and long-treating psychiatrist ever could.  Your phone and your computer have tracked your waking and sleeping habits, when and where you eat, how hard your heart beats when you watch certain television programs, how often you speed, what sort of humor you prefer, and deeper things-- like your unconscious sexual preferences and racial biases.

It can tell when you are depressed, for example.  So, for the right sum, psychometric computers can, for example, target each Democratic voter who is feeling down on election day, and send deeply personal emotional cues in seeming ads, not even consciously noticed, to make those persons feel much worse.  The turnout of that subgroup will be markedly lower.  That's an extrapolation, but all the pieces are in place.

We cannot hope to compete individually with the power of supercomputers using psychometric algorithms to manipulate our behavior.  With 1800 and more data points about each of us, the vote will go to the wielders of this tool.  Remember the performance of the IBM Watson computer on the TV quiz show Jeopardy? That sort of power is being brought to bear against you and your political worldview right now --and what's more, it has a nearly infinite capacity to learn and practice from its mistakes, setting itself against itself, as in the case of the computer that won the Go championship.  It's as if a team of psychiatrists could spy on you in intimate detail, confer among themselves for years about how to move you, then go back in time to snap out a decision.  It's as if you were the dreamer target in the Inception movie.  You don't have a chance against that sort of sophistication.

And the vote is just one aspect of this new world.  Your sources of news are now Facebook and Google and Instagram and Twitter--to the extent that you follow news at all.  That makes for a very censored and curated worldview.  Sure, you can see the websites you prefer--if you remember them, or have the time to pick them out.  Otherwise, your information becomes narrowed to Fox, CNN, the New York Times, and Newsweek--and none of those organizations profit from peace initiatives, and/or efforts to correct the maldistribution of wealth and rights in this country.

Tune in, or pull up the kboo.fm/presswatch podcast.  You'll be glad you did.